In part 1 of 2 parts, I gave some context to one of the most common interpretations for the posttrib view, where the seals, trumpets, and bowls occur roughly at the same time. Indeed, many posttribs believe the corresponding elements are the same events; i.e. the seventh trumpet is the seventh bowl.

Over the years from studying posttribulationism, I am convinced that this posttrib interpretation necessarily forces a framework upon the book of Revelation because of a deep-seated presupposition that they hold.

Enter the concurrent-recapitulation interpretation of posttribulationism.

Since this issue is important and a very common point of disagreement between prewrath and posttrib, I will argue that the concurrent-recapitulation interpretation is not only implausible but contradictory. In addition, I will show that the consecutive-progressive framework is the most natural, intended interpretation to the relationship of the seals, trumpets, and bowls.

Seals, Trumpets, Bowls – At the Same Time or One After the Other?

The prewrath position interprets a sequential chronological framework for the seals, trumpets, and bowls. That is, the seal-trumpet-bowl septets (sets of seven) will happen in a consecutive-progressive fashion with each septet consecutively following each other. For example, the trumpet septet cannot begin until the seventh seal is opened; and the bowl septet cannot begin before the seventh trumpet is blown. The last judgment element of the day of the Lord’s wrath will be the seventh bowl. Accordingly, the seventh seal and the seventh trumpet serve as transitions to the next set of God’s climaxing judgments, culminating with the seventh bowl. 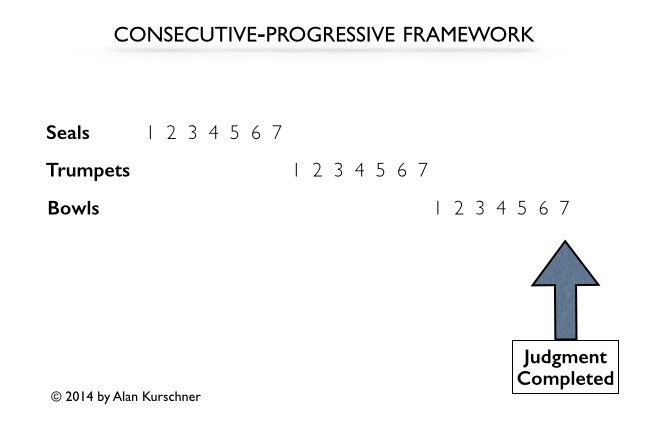 Posttribulationists subscribe instead to a concurrent-recapitulation framework with the septets occurring at the same time with the judgment elements giving different emphases or perspectives. For example, it is said that the sixth seal, sixth trumpet, and six bowl describe the same event from a different angle. Accordingly, the last element in the day of the Lord’s wrath describes the seventh of each septet; thus, the seventh seal, seventh trumpet, and seventh bowl is the same event from different perspectives. And there are those posttribulationists who hold that it does not describe the exact same event, but they affirm that the three elements occur roughly at the same time. For all practically purposes, the main point is that both of these posttrib interpretations do not view the trumpets and bowls occurring after the seventh seal is opened. 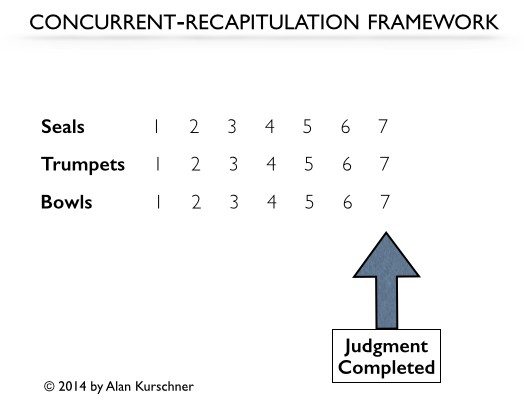 I should note that this debate does not hinge on whether each judgment element within the septets succeed each other; that is not the issue. The main question is: does each of the three septets themselves succeed each other (consecutive) or do they simultaneously unfold (concurrent)?

My aim is to demonstrate that the concurrent view is flawed. I will also argue for the consecutive nature to the three septets, showing that the seventh seal does not depict the culmination but the introduction to the day of the Lord via the seven trumpets and culminating in the seven bowls.

There are two main observations from the book of Revelation that lead posttribulationists to conclude the concurrent-recapitulation theory is correct. First, they will point out that the septets possess a similar structure, thinking these depict the same events with different emphases. They draw attention to at least two observations: (1) the first four elements of each septet share a structured unit, and (2) the first two septets, the seals and trumpets, each contain a parenthetical section between the sixth and seventh element.

However, this is a non sequitur (no pun intended) to reason that because they share similar forms, therefore they must possess the same content and occur at the same time. It is a fallacy to equate similarity with identity.

The second observation is where their theory either falls or stands. They will point out similarities between the sixth and seventh element of each septet, along with their parenthetical sections, concluding all three describe the end. They argue that since there cannot be “three ultimate ends,” it follows that they recapitulate the trumpet and bowls back into the seals giving a composite of a single event (see the chart above). Marko Jauhiainen pinpoints their key argument for the recapitulation theory, he writes,

In part 2, I will give reasons against the concurrent-recapitulatory framework of the septets, while at the same time showing that the consecutive-progressive structure is the most natural interpretation.