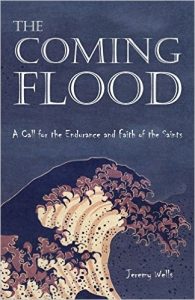 James Pate has written a brief book review of Jeremy Wells’ book The Coming Flood: A Call for the Endurance and Faith of the Saints. I have not read this book but intend to. But I wanted to respond very briefly to Wells’ thesis, who seems to come from a post-trib view, so being a prewrather I will not share selected post-tribulational presuppositions. Nevertheless.

“In The Coming Flood, Jeremy Wells argues against the pre-tribulational view of the rapture and offers thoughts on parts of the Book of Revelation.  For Wells, Gentile Christians will not be raptured to heaven before the Great Tribulation but will be slaughtered by the Antichrist.”

This is an interesting thesis, but not tenable. Wells attempts to explain the lack of references to the Church in much of the Book of Revelation. His explanation is that all Gentile Christians will be martyred during the Antichrist’s great tribulation, while the 144,000 believing Jews will survive through supernatural preservation up to the parousia.

I am sympathetic to his thesis because it jolts the Church into grasping the seriousness of this future period. I don’t think the Church (and especially pretrib believers) truly understand the scope and magnitude of this time. There will be an unequaled slaughter of Christians that the Church has never faced. I suspect that the vast majority of the Church will be slaughtered. Did that just sober you up? I hope so. Hence the warnings of Jesus, Paul, and the book of Revelation.

However, I believe that Wells has overstated his case claiming that all Gentile Christians will perish for at least the following reasons:

i. There is a much more plausible and linguistic reason why the word “Church” is not mentioned in much of the book of Revelation. It stems from not understanding the all-too common word-concept fallacy that I have written on here.

ii. Paul uses the Greek term περιλείπομαι in verses 15 and 17 to refer to those who are alive up to the parousia of Christ. The term indicates, not just being “alive,” but survival. In the very same clause, Paul uses the first person plural “we” (ἡμεῖς). And since Paul is writing to mainly Gentile believers, it is hardly the case that Paul is excluding the event of believing Gentiles to be alive and have survived at the parousia.

iii. Wells (rightly) thinks the 144,000 Jews will be safely protected during the Antichrist’s great tribulation. But how does this explain Jesus’ prophecy that there will be believers who will be experiencing persecution during this time:

“For then there will be great tribulation, such as has not been from the beginning of the world until now, no, and never will be. And if those days had not been cut short, no human being would be saved. But for the sake of the elect those days will be cut short.” (Matt 24:21–22)

And notice the very last part of this passage: “But for the sake of the elect those days will be cut short.” In other words, this group is not safely protected somewhere. If God will not intervene on the behalf of this persecuted group then the elect would be exterminated. But here Jesus is consistent with the apostle Paul teaching that there will be believers surviving while being persecuted who will make it alive to the parousia.

More developed evidence could be cited but I believe these reasons suffice to show that not all Gentile Christians will die during the great tribulation. I am sure Wells has many good points that I would agree with in his book and I hope to read it once I find time.

Finally, I think the following point by Pate on Well’s book should be noted:

Wells talks some about the psychological effects of the pre-trib rapture doctrine and his own doctrine.  Wells can empathize with those who like the pre-trib doctrine because it offers them comfort: they are happy that they will not have to suffer the horrors of the Tribulation!  On the one hand, Wells seems to be trying to reassure them that they will not lose that sense of comfort by embracing his position: they are still going to the same place (to be with God), even if that comes after their death at the hands of the Antichrist, rather than before the Tribulation!  That is an interesting way to look at the situation: Why fear anything, including the Tribulation, if your destiny is to be with God?  On the other hand, Wells appears to acknowledge that embracing his position does entail hardship that is absent from the pre-trib position.  For Wells, if Gentile Christians will be slaughtered at the hands of the Antichrist, then they need to prepare themselves spiritually for that, becoming stronger in their faith.