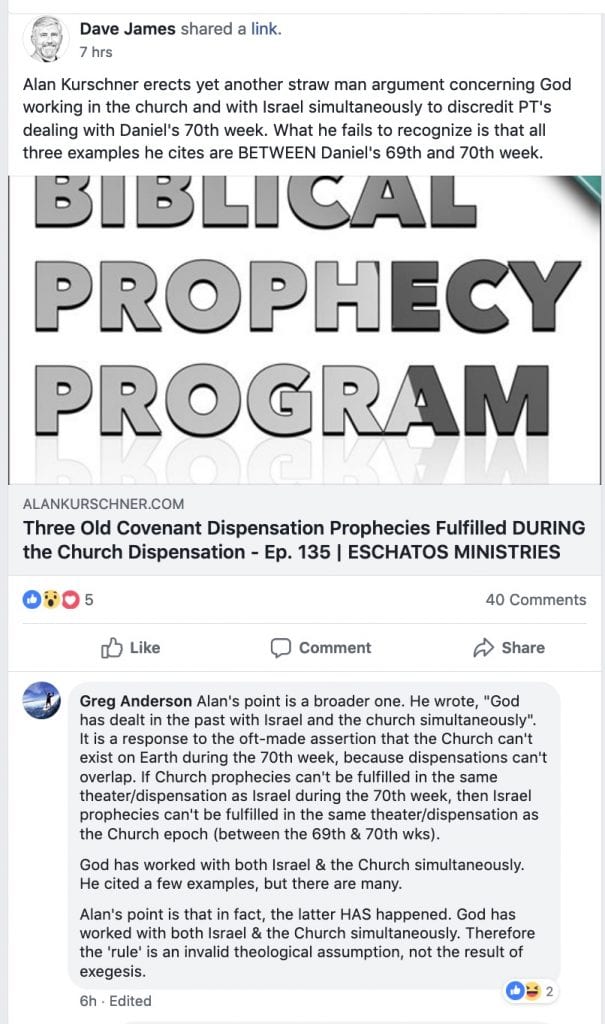 Today I did an episode demonstrating that God has worked with Israel and the church simultaneously in the past. I described three prophecies that were given to Israel, and about Israel, that have been fulfilled in the past during the church age. The point of this was two-fold: (1) to demonstrate that God does indeed work with Israel and the church at the same time, and (2) to show that it is inconsistent to claim that Daniel’s seventy-weeks prophecy made to Israel must exclude the church from being on earth during the final seven years of that prophecy, while other prophecies to Israel may occur while the church is present.

Above, Dave James objected to my argument by calling it a “straw man.” I don’t think James is aware of what his own dispensationalism teaches. It teaches that the rapture is pretrib because the church will be raptured before the 70th week of Daniel—since God must be working with only Israel at this time for dispensational-no-overlapping reasons.

James, realizing that my counter arguments undercut his traditional pretribulationism, is moving the goalposts by conceding that God does work with both Israel and the church “between” the 69th and 70th week, but then claiming that he will not work with both during the 70th week.

This moves Dave James only tighter in a corner, since it begs the question: why can God work with both Israel and the church during the church age, but not during the 70th week of Daniel? In my episode two weeks ago, I explained that they have no good answer for this—it is simply an assumption.

You can see above that Greg Anderson also responds with clarity to Dave James’s flawed reasoning. See the remaining thread here: