[*There will be no episode of The Biblical Prophecy Program today since I have a respiratory virus and talking causes coughing fits. But in lieu of the program I wanted to write up a reply to the following claim by John Hart.] 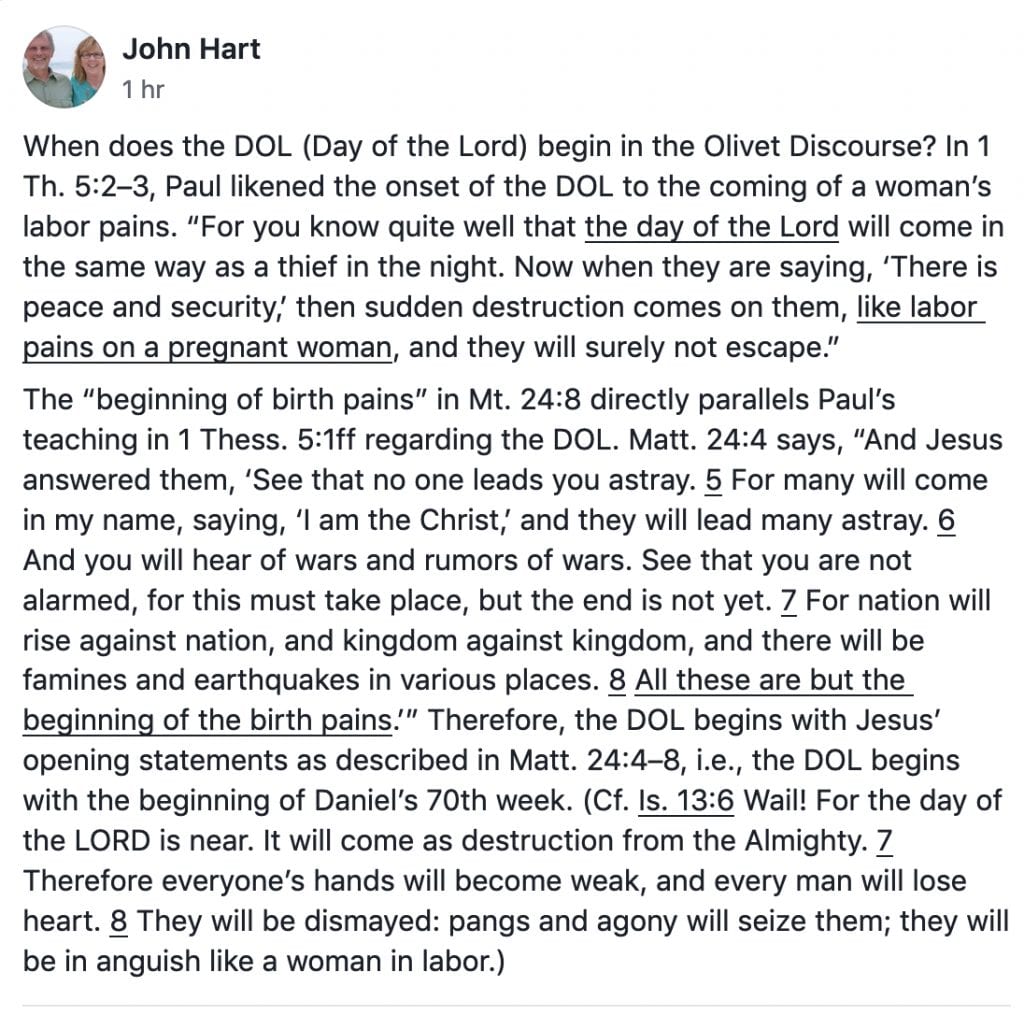 “While people are saying, ‘There is peace and security,’ then sudden destruction will come upon them as labor pains come upon a pregnant woman, and they will not escape.” (1 Thess 5:3)

I want to respond to Hart’s deficient comparison between Jesus and Paul’s use of the common metaphor of birth pangs.

The problem with Hart’s comparison is that he only quotes the passages but does not actually explain why he thinks Jesus and Paul is speaking of the same period. He simply assumes this and expects the reader to take his word as Gospel.

In an attempt to make the “beginning of birth pangs” in Matthew 24:8 describe the day of the Lord’s wrath, pretribulationists assert that this is parallel with Paul’s usage of “birth pangs” in 1 Thessalonians 5:3, which clearly refers to the beginning of God’s wrath. However, beneath this surface-level reading, the respective contexts show that Jesus and Paul are not describing the same event, but actually opposite events. The metaphor “birth pangs” is not a technical phrase to denote the day of the Lord as some wrongly claim. Context must determine the application of the usage of the common metaphor of birth pangs.

There are six differences that demonstrate that Jesus and Paul are using it for two separate and distinct periods.

1. Jesus’ usage in Matthew 24 occurs before the great tribulation; Paul’s usage is found at the inception of the day of the Lord. Jesus uses the birthing metaphor to warn that the end has not arrived (“Make sure that you are not alarmed, for this must happen, but the end is still to come. . . All these things are the beginning of birth pains”). Paul uses it to announce that the end has arrived (“then sudden destruction comes on them, like labor pains,” cf. Isa 13:7–8).

2. Accordingly, Jesus emphasizes the tolerable stage of “the beginning of birth pains” (Matt 24:8); hence, the reason he reassures, “Make sure that you are not alarmed, for this must happen, but the end is still to come” (Matt 24:6). In contrast, Paul is drawing from Isaiah’s labor imagery focused on the intolerable stage of actual giving birth, “cramps and pain seize hold of them like those of a woman who is straining to give birth” (Isa 13:8).

3. Jesus teaches that the “beginning of birth pangs” is what Christians are destined to experience (Matt 24:4–8); Paul teaches just the opposite that Christians are promised exemption from the hard labor pains, the time of God’s wrath (1 Thess 5:9).

4. The labor pains in Matthew 24 refer to natural events such as false christs, wars, famines, and earthquakes (Matt 24:5–8). Paul’s reference is to the supernatural event of the day of the Lord (2 Thess 1:5–8).

6. Jesus uses the birthing metaphor to apply to both unbelievers and believers (Matt 24:5–8). While Paul uses it exclusively applied to unbelievers (1 Thess 5:3–4).

For these reasons, Jesus and Paul use the metaphor for their respective purposes. The interpreter must be careful not to fall into the similarity equals identity fallacy. Context, Context, and Context.