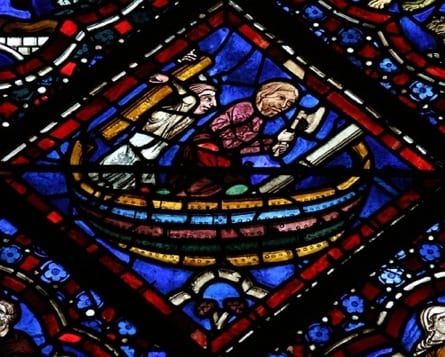 On occasion I hear some pretrib teachers attempt to argue for a gap of time between the rapture and the beginning of the 70th week of Daniel, which they wrongly equate with the Day of the Lord’s wrath. They do this to try to get around the “Before the Day of the Lord” passages that undermine their imminence theology (Joel 2:30–31, Mal 4:5, 1 Thess 5:2–3, 2 Thess 2:3). They cite Genesis 7, the flood account, and quickly assume that it says that there were seven days between Noah and his family entering the ark and when the flood started. And since Jesus speaks of his return “as in the days of Noah” they conclude that is what Jesus means.

Also, there are other pretrib interpreters who use Jesus’s analogy completely differently. They argue that the “seven days” is a “type” of the seven year tribulation period, where this “proves” that the rapture occurs the very day before the seven-year period begins, which they also assume equals God’s wrath.

So which of the two pretribulation interpretations gets it right?

They have not bothered to actually read the flood account, carefully.

First, both of their interpretations contradict Jesus’s explicit words that it will happen on the same day.

The days are coming when you will desire to see one of the days of the Son of Man, and you will not see it. Then people will say to you, ‘Look, there he is!’ or ‘Look, here he is!’ Do not go out or chase after them. For just like the lightning flashes and lights up the sky from one side to the other, so will the Son of Man be in his day. But first he must suffer many things and be rejected by this generation. Just as it was in the days of Noah, so too it will be in the days of the Son of Man. People were eating, they were drinking, they were marrying, they were being given in marriage—right up to the day Noah entered the ark. Then the flood came and destroyed them all. (Luke 17:22–27, cf. Gen 7:1–18)

The deluge began the very day Noah and his family entered the ark and shut the door (Gen 7:1–18). Noah was told that he had seven days to corral the animals because the Lord warned, “in seven days I will cause it to rain” (Gen 7:4). At the end of the seven days “all the fountains of the great deep burst open and the floodgates of the heavens were opened” (Gen 7:11).

It was the same day they entered, the flood began, not two days or five days or seven days later—the very same day.

Drawing from Jesus’s Noahic analogy we can conclude there will not be any “gap” of days, weeks, months, or years between the deliverance of the righteous and the unleashing of God’s wrath at Jesus’s return. It will be back-to-back events beginning on the same day—one of the main purposes for delivering God’s people is to protect them from his judgment.

To make sure Jesus is not misunderstood about this same-day truth, he marshals the episode of Lot and Sodom (see Luke 17:28–35).