I am asked if the events in Matt 24:9–14 portray events throughout church history or during the future seven-year period.

“Then they will hand you over to be persecuted and will kill you. You will be hated by all the nations because of my name. Then many will be led into sin, and they will betray one another and hate one another. And many false prophets will appear and deceive many, and because lawlessness will increase so much, the love of many will grow cold. But the person who endures to the end will be saved. And this gospel of the kingdom will be preached throughout the whole inhabited earth as a testimony to all the nations, and then the end will come.” (Matt 24:9–14)

The vast majority of futurist interpreters view 24:15 as the first mentioned event in the Olivet Discourse of the great tribulation, the abomination of desolation which will occur at the midpoint during the future seven-year period:

“Therefore [οὖν, oun] when you see the ABOMINATION OF DESOLATION which was spoken of through Daniel the prophet, standing in the holy place (let the reader understand)” (Matt 24:15).

They are correct that v. 15 refers to this event, and that the abomination of desolation will occur in conjunction at the midpoint of the seven-year period when the Antichrist’s great tribulation begins.

However, Matthew begins this clause with a very significant Greek discourse marker, the inferential oun, which signals an inferential relationship with what just came before it in the immediate context. In other words, the events in vv. 15ff are not sequential from what just came before it (not to mention it would absurdly have the end of the age with Jesus’s return happen before the abomination of desolation!). I have said before that the “body” of Matthew’s Olivet Discourse is in essence vv. 4–14. Everything else that follows is Jesus’s exposition on (i.e. unpacking) those eleven verses.

Since we know that Jesus links the great tribulation persecution of God’s people with the abomination of desolation in vv. 15–21, the only possible referent of the great tribulation that is linked with the inference of oun in the previous immediate context would be found in v. 9ff: “Then they will deliver you to tribulation, and will kill you, and you will be hated by all nations because of My name” (Matt 24:9). The martyrdom realized in this verse is coupled with all the other trials that Jesus mentions: “At that time many will fall away and will betray one another and hate one another. Many false prophets will arise and will mislead many. Because lawlessness is increased, most people’s love will grow cold. But the one who endures to the end, he will be saved” (Matt 24:10–13).

This naturally is followed by the end of the age: “This gospel of the kingdom shall be preached in the whole world as a testimony to all the nations, and then the end will come” (Matt 24:14). This is consistent with the persecution that we are told later in the discourse where Jesus’s return will cut short the great tribulation.

It has always perplexed interpreters why the end of the age is mentioned in v. 14 before the abomination of desolation event. Now they should know why, because of that short three-letter conjunction that is so significant!

So the answer is “no.” The events portrayed in Matt 24:9–14 do not occur throughout church history. Rather they are a variety of trials that Christians will experience during the future Antichrist’s great tribulation.

Here is a chart from the e-store that illustrates this point: 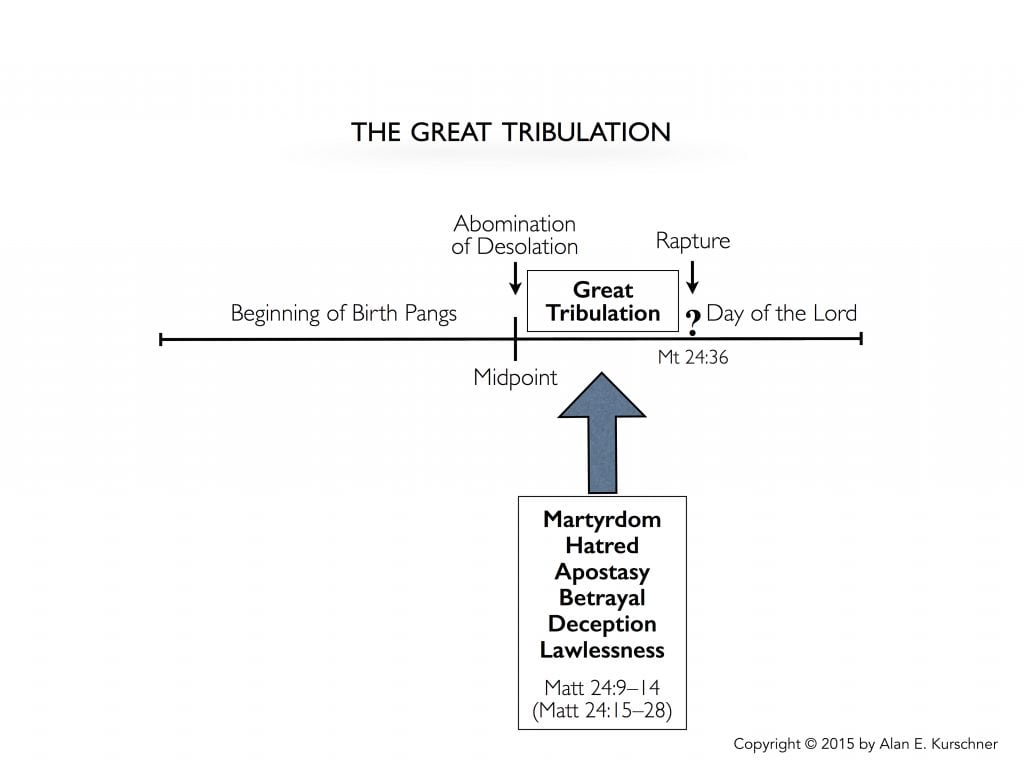 Incidentally, I have addressed this issue in my book Antichrist Before the Day of the Lord.