(This is a guest post by Dr. Dean Furlong)

I want to thank Dr. Alan Kurschner for inviting me to write a guest post on Jerome’s translation of the Greek word apostasia (usually translated “falling away”) with discessio in Jerome’s Latin Vulgate.

According to Thomas Ice, the word apostasia in 2 Thes. 2:3 refers to a physical departure, which he interprets to be the rapture. After noting that many early English versions translated apostasia with “departure,” he goes on to claim:

In fact, Jerome’s Latin translation known as the Vulgate from around the time of A.D. 400 renders apostasia with the “word discessio, meaning ‘departure.’*

Ice’s comment might give the impression that Jerome thought that apostasia in Greek referred to a physical departure. While the word discessio in Latin can refer to a physical departure (e.g. Acts 20:29 in the Vulgate, where it translates the Greek aphixis), it can also refer to a falling away from something (Acts 21:21, where it translates the Greek apostasia).

So what did Jerome think the apostasia/discessio might be? In his letter to Algasia, written in 406, he interprets 2 Thess. 2:3 as speaking of a revolt of nations from Roman authority:

For he [Paul] says that unless the falling away (discessio), which is called apostasia, comes first, so that all the nations who are subject to the Roman authority withdraw from them; and he will be revealed, that is, manifested, whom all the words of the prophets announced beforehand, the man of sin (author’s translation).

Before bringing up Jerome, Ice had claimed that Wycliffe’s translation read “departure” here, as though he had referred it to the rapture. This is interesting for our purposes, since Wycliffe translated the Latin Vulgate into English. Here is what Wycliffe actually wrote: 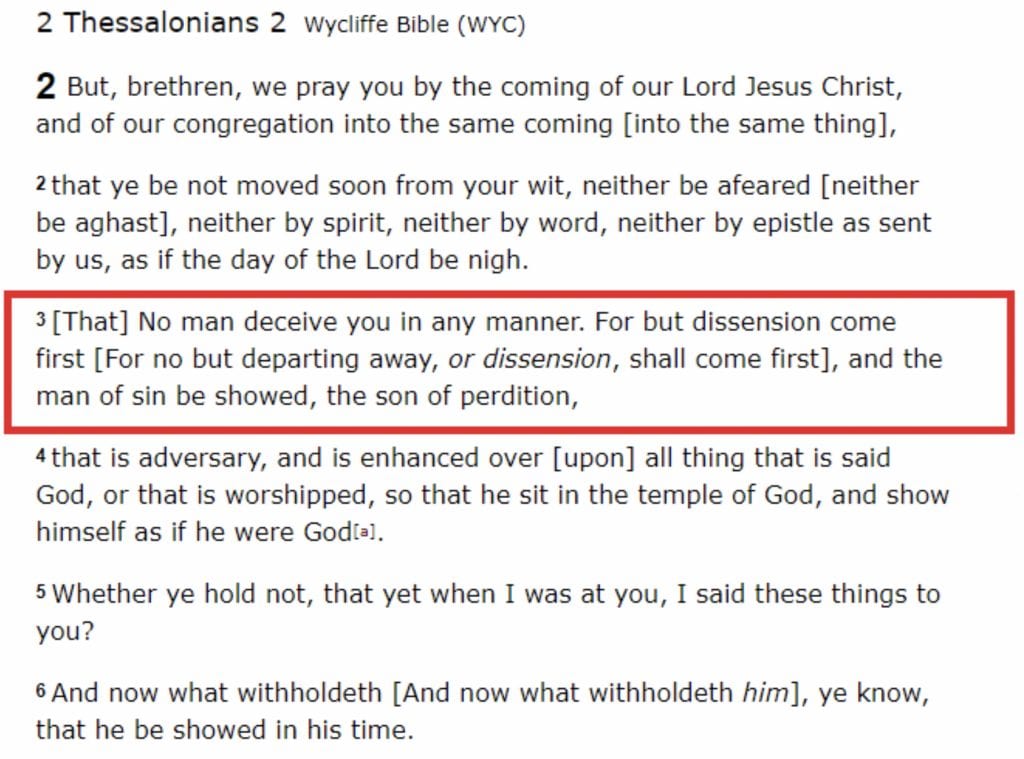 It is clear here that John Wycliffe (in his original 1382 translation from the Vulgate, here in square brackets) understood the “departing away” to be a “dissension,” and this reading was exclusively adopted by Wycliffe’s disciple John Purvey in his revision (with Wycliffe’s approval) of the 1382 translation published in 1388 (the main text).

Clearly neither the Vulgate nor the Wycliffe Bible translated from it support any idea that Paul was speaking of a physical departure.

Does Apostasia in 2 Thessalonians 2:3 Refer to a ‘Physical Departure’ (i.e. the Rapture)?

How Did the Syriac Version Translate the Greek ‘Apostasia’ in 2 Thess 2:3?